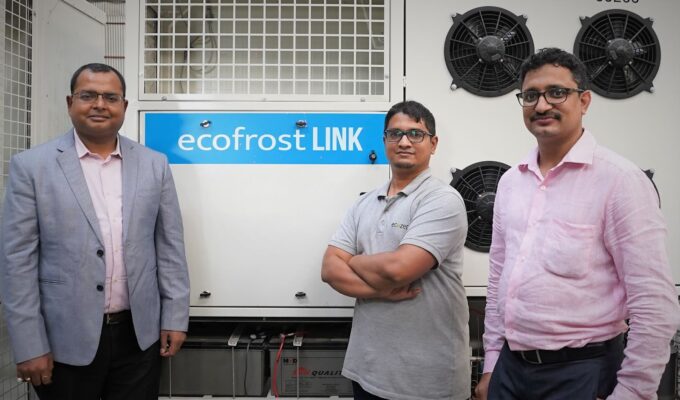 Vaani Enterprises – Banking on the Ecofrost

Manish Agarwal, the Director of Vaani Enterprises, our dealer in Jharkhand, speaks to us about the growing popularity of Ecofrost in his home state.

Manish Agarwal comes from humble beginnings. However, there were a few characteristics traits that got him to be the successful businessman he is today. Namely, his thirst for knowledge, an incredible work ethic and the unique ability to see the future. No. he is not a superhero, but through experience, he sees opportunity and areas of burgeoning possibilities. When he came across Ecofrost, Ecozen’s innovative and the World’s Leading cold room solution, it was one of those light bulb moments for him. He saw the potential impact Ecofrost could have on the farmers and the agricultural sector in his home state; Jharkhand.

Can you tell us about yourself?

I am Manish Agarwal, and I am the Managing Director of Vaani Enterprises, a distributor of renewable energy (solar) products based in Ranchi. I do not come from a wealthy family, so much so, that I taught my juniors after school so that I could pay for my higher education. My father and grandfather were students of the Urdu language and passed that skill on to me. Hence, I was naturally drawn to writing and was especially interested in being a journalist. So to become one, I took up a job as a cleaner in the local paper, and after a few years achieved my dream of becoming a journalist. An opportunity through a mentor got me my first job in an MNC that was dealing in renewable energy products.

Why did you start your own business? And, why in renewable energy?

Starting my own business was a thought that was always present. So armed with the experience of selling renewable energy products I started Vaani Enterprises in 2017 and naturally focussed on solar-powered products. I saw first-hand the positive impact renewable energy products, like rooftop solar, solar lights etc. had on a city, its people and the environment, and I believed it was the right time to get into this industry. Jharkhand is the largest producer of coal in India, but its citizens would benefit a great deal from solar-powered products. Especially its farmers.

Why did you choose the name Vaani?

I came across an article about a famous german car brand, and how it was named after the founder’s daughter. It was at that time that I decided that I would do the same when I started my own business. Hence the name Vaani.

What made you so keen on working with Ecozen?

Back in 2020 one of my managers told me about this incredible solar cold room, Ecofrost, that could run on hybrid power sources (i.e. solar, grid, Genset), had 30 hours of batteryless backup, could be monitored using a mobile app, was portable and could help farmers increase shelf life and reduce produce wastage. Intrigued, I researched Ecozen, the company that made the Ecofrost and met one of their directors, Vivek Pandey who is from Ranchi. What sold me the most was what they showcased was what they delivered. Before Vaani signed on as a dealer for Ecozen there were already a few units installed in Jharkhand. I visited these units and spoke to the local farmers and they were all very pleased with the product and the service of the Ecozen team, right from installation, to training, to after-sales service. A company can have a great product, but bad service can still make it fail. Hearing such positive feedback from a customer made me certain of partnering with Ecozen.

What makes Ecofrost the most suitable or the best solar cold room for Jharkhand?

Like I mentioned earlier, product features like 30 hours batteryless backup and the ability to run on either solar, grid or Genset, are key to making Ecofrost a good fit for the Jharkhand market, due to the inconsistent supply of grid-based electricity.

Currently, in Jharkhand, we waste over 40% of our agricultural produce before it gets to a consumer. This waste is primarily due to inadequate post-harvest management. In this scenario, two elements make Ecofrost stand out:

Last but not the least, is the after-sales service provided by Ecozen, which is now strengthened by the team at Vaani Enterprises. Our service engineers have been extensively trained by Ecozen. In case of a malfunction, a service engineer will be at the customer’s location in 24 hours. And thanks to the 30 hours of battery-less backup that comes with Ecofrost, our customer’s produce is safe and fresh.

Has the Ecofrost made any impact on the state of Jharkhand, its farmers and its agricultural industry?

Without a doubt. Let’s start with an example of a tomato farmer in Jharkhand. With Ecofrost, he was able to store his produce for over 15 days and sell when the price was right, thereby maximising his earnings from his yield. Another guava framer, pre-cools and stores his produce in Ecofrost. As a result, he sells his guavas in the export market, all because proper post-harvest management with the Ecofrost increases shelf life and keeps the produce fresher for longer.

The tremendous impact that Ecofrost offers, has not gone unnoticed by key government officials. The performance of Ecofrost has made it the top choice of the Government of Jharkhand. The first units were deployed by Mr Shashi Ranjan (IAS, batch 2013), the honourable District Collector of Palamu, and Mr Abu Imran (IAS, batch 2010), the honourable District Collector of Latehar. The honourable Chief Minister, Mr Hemant Soren has also set aside funds for the deployment of Ecofrost units across Jharkhand.

With this preference from the farmers and government officials, Ecofrost is beginning to have a major impact on the agricultural sector in Jharkhand. The day is not far when with the help of Ecofrost and other innovative products from Ecozen, the agricultural produce of Jharkhand will reach homes across India.